One of my fondest memories as a child was waking up to waffles on Saturday mornings.  It was what we did every Saturday.  My mom would get up and make us breakfast, I think it is the only thing that would get my brother out of bed on a Saturday.  Well, with those waffles always came homemade syrup.  At the time I had no idea this was so strange, but as I have grown older, I have realized it really is weird. 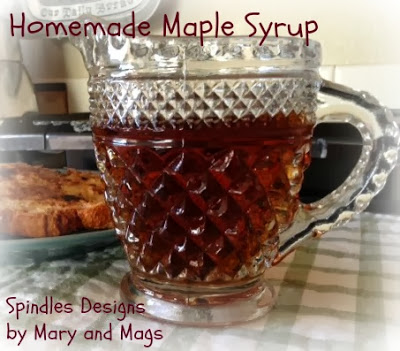 My best friend growing up loved to sleep over for Saturday morning waffles, she would drown her waffle in syrup making it very soggy, we would joke that there was more syrup then waffle.  The recipe was named after her in our family cookbook, “Julie’s Favorite Maple Syrup” because she loved it so much.  This should have been my clue for our families insanity, but that would not happen for years.

It was not until after I got married that I realized just how strange this family habit was (and is).  It was our first trip to the grocery store as husband and wife, we needed to stock the kitchen so we did not starve.  As we walked down the isle with the spices and baking stuff I grabbed a bottle of mapleine.  My husband then asked, “What is that for?” I casually answered (having no idea it was so weird), “It’s to make maple syrup, for pancakes and waffles.”  He stopped short and gave the greatest face I have ever seen and said, “You make your own syrup?”  To which I could do nothing but smile and say, “Well, yes we always have.”  I then had to proceed in telling more of my life’s history and how to make syrup.  We laugh about this conversation now, and he willingly admits that he has been converted to the yumminess that is homemade maple syrup.

Directions:
1. Put all sugar and water in a saucepan.  Bring to a boil, let boil about 30 seconds.
2. Remove from heat, stir in Mapleine.
3.  Serve warm over waffles, pancakes, french toast, or anything else you like maple syrup on. 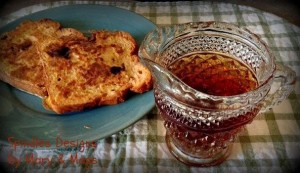