I have often been mystified by the difference in marinade and marinate.  Which one is supposed to be used?  I know it depends on the situation, but that’s as far as my knowledge really goes.  For the sake of trying to be correct, I looked it up.  Here is what I found:  Marinade is the physical stuff that meat or other things are put in, whereas marinate is the verb or action of having meat in a marinade.  I only think I fully understand, I hope I have the correct version in my title… 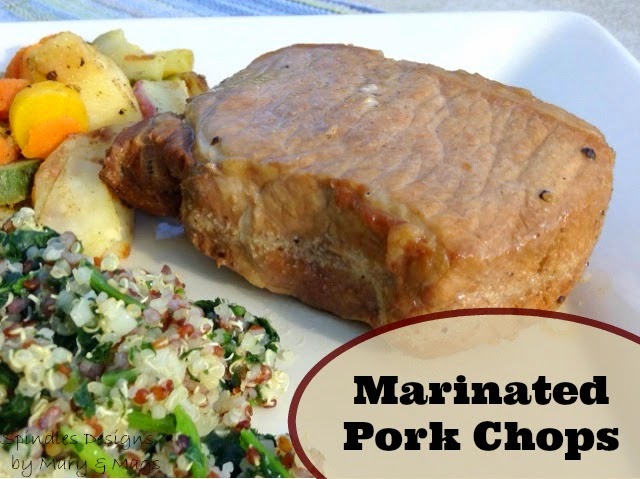 Either way, this is a fantastic marinade.  It is a true family favorite that we make again and again at our house.  The only thing that would make it better is if we had a working grill to grill it on.  I prefer it grilled, but it works just as well cooking it in a skillet on the stove. 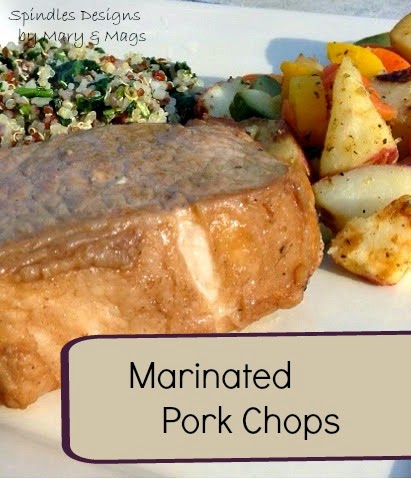 Ingredients:
2/3 cup oil
1/3 cup soy sauce
1/4 cup cider or red wine vinegar
2 tbsp lemon juice
2 tbsp Worcestershire sauce
2 cloves garlic minced
1-2 tbsp dry mustard
1-2 tsp course black pepper
1 tsp salt
6-8 boneless pork chops
Mix first nine ingredients in a medium bowl and place in a re-sealable plastic bag.  Add pork, turn to coat, seal and refrigerate over night.  Place chops on a medium hot grill and cook until internal temperature reaches 165 to 170 F.  Remove from grill and let rest 5 minutes.  Serve.
If you are new to Spindles Designs we would love for you to subscribe to our e-mail updates or follow us on Facebook, Pinterest, or Twitter.
You might also like:

One thought on “Marinated Pork Chops”